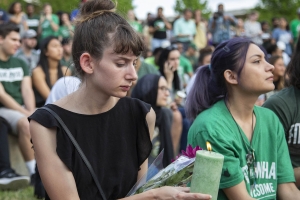 After the 2019 campus shooting at UNC Charlotte, our community had a wide range of understandable responses. Many people used Twitter to express their negative and positive emotions, as well as share information about the event. In a recent PLOS One article, UNC Charlotte faculty including myself, Erika Montanaro, Rob Cramer, Annelise Mennicke, Jennifer Langhenrichsen-Rohling and alumni Sarai Guerrero Ordonez, Sean McCabe, Shayna Farris, and Neielle Saint-Cyr analyzed how emotions and responses on Twitter changed in the days following the shooting.

Twitter remains a popular and responsive platform for information-sharing and daily chatter – in other words, it can be a temperature gauge on what the public thinks about a topic. When incidents such as mass shootings occur, we can identify opportunities for intervention based on Twitter trends discussing the event.

We analyzed over 16,000 tweets related to the incident and found that negative emotions like anger, numbness, disgust, sadness (e.g. “When will #EnoughisEnough actually be enough?”) peaked in the day following the shooting while positive emotions like hope, appreciation, humor (e.g. “UNCC shooter being taken away, hope everyone is safe”) peaked one day later.

Tweets also contained other content, such as sharing information or offering a communal response. Information sharing, which peaked the day after the incident, came in the form of sharing local news reports (e.g. “BREAKING: At least 6 people taken to hospital after shooting at the University of North Carolina - WCNC-TV”), with far fewer people sharing information provided by official UNC Charlotte entities.

Communal responses, which also peaked the day after the incident, included sharing thoughts and prayers, making requests for support, placing blame for the incident and honoring the victims (e.g. “@NHLBruins can you please send a shout out to UNC Charlotte student, Drew Pescaro as he recovers from surgery after a gun shot wound? He’s a Mass native living in NC and a big B’s fan #DrewStrong”).

Action tweets, such as general calls for action, individual or policy advocacy (e.g. “2 students have sat through an entire semester of classes. Taken tests, done homework, studied... today is the last day of class. Those 2 students were killed by a senseless shooter, unable to complete their classes, unable to take their finals, unable to have a future. #UNCC”), had a slower drop-off compared to negative emotion, indicating that after emotions flared and the news started to calm, users wanted something to happen.

For UNC Charlotte, and campuses more broadly, Twitter can be monitored to assess the needs of a grieving community. The study’s findings highlight a broader need for campuses to have comprehensive “postvention” plans that integrate social media to deliver news and factually accurate information, provide information about available resources and support, and link to action steps and plans. Often, universities are slow to respond publicly in these crises on social media, which creates a void that can further harm those affected.